Two short biographies of A.A. Milne and E.H. Shepard. Milne is the writer of the original Winnie the Pooh stories and Spehard drawn the original pictures. 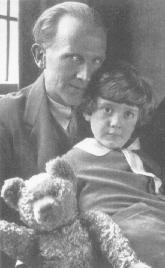 Alan Alexander Milne was born January 18, 1882, the youngest of three sons to Sarah Marie and John Vine Milne. His father ran a school for young boys, Henley House, in which Alan, and his older brothers, David Barrett Milne (Barry) and Kenneth John Milne (Ken) grew up in.
Alan first started taking classes at Henley House, his father’s school. Among his teachers there was one H. G. Wells, who would one day go on to be a famous author and a dear friend to Alan. From Henley House, he went to Westminster School, and then decided to attend Cambridge on a mathematics scholarship. His choice of Cambridge over Oxford was not based on any academic standards, but more so due to ‘The Granta’, a humourists publication produced at Cambridge.

Through correspondence, Alan and Ken collaborated on light verse which was published in ‘The Granta’ under the initials A K M, a mixture of Alan and Ken’s. After about two years, Ken withdrew from the partnership, and Alan went on to writing material solo, and fulfilling his goal of being the editor of ‘The Granta’. During the years that Alan was publishing ‘The Granta’, the publication made quite a turn-around in reader-ship, gaining a large following.

Alan moved to London and began a career as an author. He was earning a small amount of money writing articles free-lance, which he would send to newspapers, as well as publications such as ‘Punch’. He made the most money from articles published in the ‘St James Gazette’. H. G. Wells had suggested to Alan that a series of articles he had written for the ‘St James Gazette’ could be the basis for a book. In March 1905, ‘Lovers in London’ was published.

Later in 1905, ‘Punch’ began to regularly print Milne’s pieces, and his financial situation began to get a bit more secure. However, early in 1906, Alan began to plan another novel, and wrote Owen Seaman (just taking over as editor of ‘Punch’) that he would not be sending in articles for the next few months as he would be in the country concentrating on his novel. Seaman wrote back and asked Alan to wait just a bit. It was fortunate that Alan did. He met with Seaman and was asked to become assistant editor, a full time position, with the expectation of a weekly contribution to the magazine. He began on February 13, 1906.
Alan augmented his constant work for ‘Punch’ by publishing collections of his articles. What he would later consider to be his first book (wanting to forget about ‘Lovers in London’), ‘The Day’s Play’, was published in 1910. Alan sent it to J. M. Barrie, author of ‘Peter Pan’. This was to be the start of a lifelong friendship between the two.

Owen Seaman had introduced Alan to his god-daughter, Dorothy de Selincourt (Daphne to her friends) at her coming-out dance, and they married in 1913. On August 21, 1920, Christopher Robin Milne was born.

Alan had written Vespers after watching his son say his evening prayers one night, it became instantly popular, and Milne was asked to provide another children’s verse for a new children’s magazine entitled ‘The Merry-Go-Round’. That poem was ‘The Dormouse and the Doctor’, and also became quickly famous. Alan toyed with the idea of writing a whole book of children’s verse, and the result was ‘When We Were Very Young’, published in 1924. To illustrate the book, Milne enlisted the aid of ‘Punch’ illustrator, Ernest Shepard. The combination of Milne’s poetry and Shepard’s drawings proved to be a winner, as the book sold over 50.000 copies within eight weeks of its first publication.

The next book would be of short stories concerning Christopher’s nursery toys. It was entitled ‘Winnie-the-Pooh’, and once again, huge amounts of books were sold quickly. Alan had recognized the importance Shepard’s illustrations had played in ‘WWWVY’, and decided that instead of a flat rate, Shepard deserved a share of the royalties. An extremely unusual concept at the time, Alan set the split at 80/20.
With the publication of ‘The House at Pooh Corner’, Milne announced that it was the last Christopher Robin book he would write. Most critics praised the last instalment. The book sold even faster than ‘Winnie-the-Pooh’ had when it first came out.

In October 1952, Milne had a stroke with left him an invalid for his remaining years. Though not expected to live more than six weeks, Alan would remain alive for a little over three more years. A A Milne died on January 31, 1956. 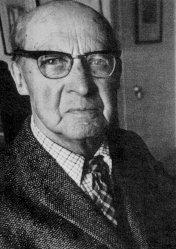 Ernest Howard Shepard was born in 1879 in London, the son of an architect. He began drawing as soon as he could even hold a pencil. He enjoyed drawing many topics, but battle scenes were a particular favourite. His drawings from the young age of seven and eight show much detail and sophistication. He applied for and was granted a scholarship at the Royal Academy Schools, specializing in painting and sculpture. He studied there from 1897 to 1902, during which time he set up a small studio with another student. Shepard met his wife and fellow artist at the Royal Academy, and they were married in 1904.
Between 1900 and 1914, Shepard illustrated seven books, including David Copperfield by Charles Dickens (1903) and Tom Brown’s Schooldays by Thomas Hughes (circa 1904). In 1907, two of his drawings were placed in Punch, and he soon became a regular contributor of cartoons.
Ernest Shepard joined the Royal Artillery during World War I, and was promoted to captain in 1917, before being discharged as a major in 1919. Following the war, Shepard continued his connections with Punch, becoming part of its senior staff in 1921. He also worked for The Sketch following the war.

Ernest Shepard is best known, however, for his work as a children’s book illustrator. It was through Punch that Shepard was introduced to A. A. Milne, the author who made him famous. Shepard illustrated Milne’s four Pooh books known worldwide: When We Were Very Young (1924), Winnie-the-Pooh (1926), Now We Are Six (1927), and The House at Pooh Corner (1928). When Shepard was first recommended to Milne as an illustrator, he was quite sceptical, saying, “What on earth do you see in that man? He’s perfectly hopeless!” But Milne later invited Shepard to visit his home to draw sketches of his son, Christopher Robin, and his stuffed animals, Kanga, Roo, Tigger, Eeyore, and Piglet.
Although Milne initially disliked Shepard’s art, he realized that Shepard was the perfect illustrator for the verses and stories about his small son and his toys. Working from the original models, from his son Graham and his teddy bear Growler, and from the settings around Milne’s homes in London and Sussex, Shepard created illustrations that are acknowledged as essential to the success of Milne’s works for children. 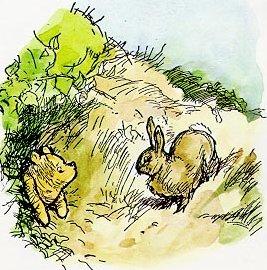 When Shepard’s wife Florence died unexpectedly in 1927, he immersed himself in his work and continued to be very productive. Between 1920 and 1940, Shepard illustrated a total of 34 books, among them his best. During this time, he established a “positive professional relationship” with another author who was to become significant in Shepard’s career. He illustrated Kenneth Grahame’s autobiographical work The Golden Age (1928) and Dream Days (1930). In 1931, Grahame’s The Wind in the Willows was published, and he created the famous Toad, Rat, and Mole that have become familiar to so many. Much later, in 1959, Shepard used water colours for eight of the full-page illustrations. He also did colour plates for The World of Pooh and The World of Christopher Robin in 1957 and 1958, respectively.

In 1969, for Shepard’s 90th birthday, he donated 300 original drawings to London’s Victoria and Albert Museum. Included in these were the original sketches for Winnie-the-Pooh and The House at Pooh Corner. Winnie-the-Pooh and its off-shoots have been translated into twenty different languages, including Latin. Since his death in 1976, there has been still another Pooh revival, including cook books, party books, excerpts of books, alphabet and number books, pop-up and press-out books, revolving picture books, and even problem solving books (according to Pooh, of course), all crediting the original illustrator, Ernest Shepard.