Paw Paws, also known as Paw Paw Bears, started as part of ‘The Funtastic World of Hanna-Barbera’ on September 2, 1985. It is a small group of bears, who live as a tribe. Every day they defend themselves from their enemies, ‘The Meanos’, led by the evil sorcerer Dark Paw. They are after the three large wooden totems of the Paw Paws: Totem Bear, Totem Tortoise and Eagle Totem.

These totems were to protect the tribe and if necessary, they came to life to protect the village. They came to life by the ‘Mystic Moonstone’ which Princess Paw Paw wore around her neck. The amulet called a totem of an eagle on a bear’s head, which stood on a tortoise. The Paw Paws had names that reflected their personality, like Laughing Paw, Brave Paw and Medicine Paw.

Brave Paw and Princess were the tribal leaders, on their magical flying ponies they rode into adventure. The elder Wise Paw served as advisor and the mascot of the group was a small dog PaPooch.

Wise Paw is the leader of the Paw Paws, he is the oldest and wisest of the tribe.

Princess Paw Paw is the daughter of Wise Paw. She is beautiful and cares for everyone and for the village. She carries the ‘Mystic Moonstone’ around her neck, which has the power to bring the Totems Bear, Tortoise and Eagle to life. When she blows her whistle, her flying horse ‘Flying Cloud’ is summoned.

Brave Paw is the best friend of Princess Paw Paw. He is brave, rescues his friends from danger and fights against evil. Besides Princess Paw Paw he is the only Paw Paw that has a flying horse. He can summon ‘Golden Thunder’ by calling his name on Thunder Mountain.

Trembly Paw is the coward of the tribe and he would rather run from danger. Yet, he sometimes performs a heroic deed.

Medicine Paw is the medicine man of the tribe, but he’s a bit of a quack.

Laughing Paw is younger than the Princess, and has a good sense of humour. PaPooch is her pet puppy. He is very loyal, but always gets into trouble.

Mighty Paw is the largest and strongest of the Paw Paws, but he is not the smartest.

Dark Paw is the main villain of the Paw Paws and the leader of the Meanos. He has a magic staff, which he used for evil purposes, but luckily he is not one of the smartest.

Aunt Pruney is the aunt of Dark Paw and a witch, flying on a vacuum cleaner instead of a broom. She is always led down by her nephew, but sometimes she helps him out.

Nice Paw used to be a villain and was called Nasty Paw. However, he is abducted by aliens and was reprogrammed into a good guy.

Eugene the Genie is a friend of the Paw Paws. He has magical powers and a cheeky attitude, especially against Dark Paw.

Greddy Greenies are green, slimy monsters. They live underground near the village of the Paw Paws and are led by the Great Greenie. They are very dangerous and even Dark Paw is afraid of them. 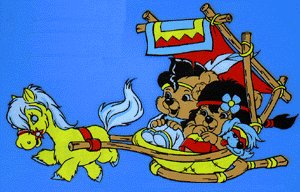