In 1893, a German seamstress named Margarete Steiff, founded a company that bears her name, and nowadays is the leader in plush teddy bears. Margarete’s nephew Richard designed the first soft bear for his aunt, whose factory produced all kinds of toys at that time. Richard’s idea for the bear came from the drawings he made from animals at the Stuttgart Zoo.

Steiff began making teddy bears as early as 1892, but the teddy bears, the company would become famous for, were made around the turn of the century. Among the zoo animals that Richard Steiff designed in 1902, was a bear with jointed arms and legs and it was code-named 55PB. In 1903, the company sold 3,000 bears to Hermann Berg, a representative of Geo Borgfelt & Co., New York, USA. But otherwise, there were not many Steiff animals sold. In America, however, the teddy bear was used by Clifford Berryman in his cartoon about President Theodore Roosevelt. This caused a run on teddy bears and this became the start of the bestselling toy by Steiff ever. 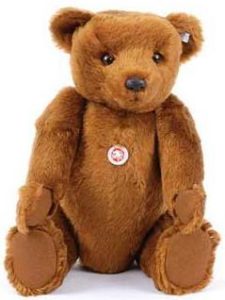 In 1904, Richard Steiff travelled to the World’s Fair in St. Louis, USA, where he discovered a bear craze. The Steiff bear won the “Grand Prix” at the exposition, while Richard and his aunt Margarete received a gold medal. Because of this, sales of teddy bears increased phenomenally. The original teddy bear had internal rods for arms, legs and head movements. Later a cuddlier version was made with internal discs for the limbs and a ball joint for the head.

To distinguish their product from the many cheap goods, Steiff patented the ‘Knopf im Ohr’ or ‘Button-in-Ear’ trademark in 1904. Since that time, all Steiff animals have an embossed button in their left ear. The first buttons were blank, but from 1906 onwards, most buttons feature the Steiff name.

Around and during the two world wars there was a shortage of raw materials, in which Steiff was forced to use cheaper alternatives. During the First World War, the German borders were closed. The Steiff employees then made military equipment such as gas masks and hand grenade handles. Between the two world wars, the market revived again, with as a high point the acquisition of the Disney license for Mickey and Minnie Mouse in 1930. During the Second World War, materials and manpower were so scarce that production had to be stopped. It was 1946 before Steiff resumed production with a ten-item line of stuffed toys. During the Allied occupation of Germany after World War II, toys had a special “U.S. Zone tag” in the arm seam.

The ‘button in ear’ trademark was first introduced in 1904, which originally had an elephant in relief on it [1]. In 1905 the Steiff ear button was patented, and the elephant was dropped for the company’s name. From 1908-1909 a material label was added [2], and from 1926 a paper label on the chest of the Teddy Bear.