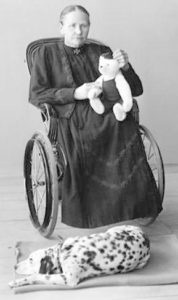 Appolonia Margarete Steiff was born July 24, 1847 in Giengen, Germany. As a baby she was crippled with polio, which confined her to a wheelchair whole her life. Despite her disability, she went to primary school and in the 1850s she got sewing lessons with her two older sisters. She learned to operate a sewing machine, she used her strong arm to operate the device. Margarete was a skilled seamstress and from 1879 on, she sold self-made women’s clothing under her own name.

As a hobby she made stuffed animals. Soon she sold pincushions in the shape of elephants to family and friends. Children began to play with her animals as well, so she made more toy animals such as dogs, cats and pigs. An elephant with a curled-S trunk, was the first Steiff trademark.

They increasingly began to focus on toys. In 1893, Margarete Steiff GmbH was founded and they began to focus on toys only, because this transcended the sales of clothing. Although the parents of Margarete Steiff feared that her siblings were destined to work hard to support their sister their entire lives, it was the wheelchair-bound Margarete who started a family dynasty, which lasts for over a century. Margarete died on May 9, 1909 in Giengen of pneumonia. 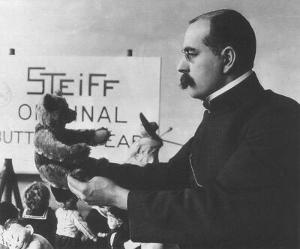 Richard Steiff was born on February 7, 1877, in Giengen, Germany. He was the second son of Fritz Steiff and the nephew of Margarete Steiff. He attended the ‘Kunstgewerbeschule’ (School of Arts and Crafts) in Stuttgart, where he regularly visited the nearby ‘Nill Zoologischer Garten’ (zoo) visited. He was fascinated by the animals there and made many drawings and sketches, especially of the bears. These drawings formed the basis of the first teddy bear and later stuffed animals made by Steiff.

In 1897 he joined the company of his aunt Margarete, where he invented many new products. One of which was the teddy bear. In 1902 he made a teddy bear that got the code name PB 55. 55 was the height of the teddy bear in centimetres, the P stood for Plusch (plush) and B for Beweglich (movable). The bear was exhibited for the first time at the Leipziger Spielwarenmesse in Germany in 1903.

The bear became a great success when an American buyer bought all 100 teddy bears that were present and also placed an order for 3,000 more pieces. But Richard Steiff was not yet satisfied with the teddy bear. After more visits to the zoo, he made a younger-looking copy of the original bear. In the new version, the straw was exchanged for a mixture of wood wool and kapok and the bear had a more realistic appearance.

Richard Steiff was an entrepreneur and inventor. He developed the Rotoplan, a kind of kite that could take aerial photographs. For Steiff, Richard designed the ‘Jungfrauenaquarium’, a factory of concrete and steel, where employees had enough daylight. In 1905 he invented the cardboard discs to attach the arms and legs to the body of the teddy bear, a method still in use. The first teddy bears had string or wire to attach the limbs, but too often worked loose.

In 1893, Margarete’s brother Fritz joined the company as a sales representative. Fritz’s children entered their aunt business around that time, two of Margarete’s nieces worked as employee’s supervisors. But it were Fritz’s six sons, who would take a leading role in the company.

So there was an extensive management team by the time Franz died in 1908 and Margarete died in 1909. Hugo and Otto were elected as managing directors, while Richard and Paul worked on the creative side of the business.