Poby is a polar bear who lives on a glacier. He lives with six other animal friends in the village of Porong Porong Forrest on a snowy island. There, they face challenges and every time they learn a valuable lesson. Poby is the biggest of the friends and has a gentle nature. He likes fishing and shooting and doing all the chores in the village. Poby has a big, black nose and wearing a blue denim overall.

Far far away, unknown and untouched by human civilization, lays a peaceful island covered with snow and ice. On this white island, deep in a small secluded forest, is a tiny village inhabited by small animals. Nobody knows how they arrived on the island, but they live in the village in the little valley where the sun is the warmest and the cold wind is least harsh. In the village lives Pororo, a very curious mischievous little penguin, the kind-hearted polar bear Poby, the smug nosy red fox Eddy, the shy and timid little beaver Loopy, the friendly penguin girl Petty and the happy hummingbird Harry. All friends have different personalities and different interests, sometimes leading to small (and sometimes not so small) happenings in their quiet white world. But they’re all good friends and they know how to help each out other in times of need.

Pororo is a little blue penguin and name giver of the series. He gets in all sorts of mischief with his friends and lives in a house in a pine tree with Crong his dinosaur friend.

Crong is a little, green dinosaur. Pororo, one day discovers an egg, which later hatches Crong. He is adopted by Pororo as his little brother.

Eddy is a little red fox who is intelligent and a great inventor. Often his inventions cause real problems for everyone in the neighbourhood. Eddy lives in a hollowed-out tree stump.

Loopy is a beaver that is often the wisest of the bunch. She is very shy and sensitive. Loopy lives in a hollowed log and invites her friends to her home, to cook for them.

Petty has a female penguin who most guys have a crush, but she is unaware of it. She is a tomboy, who is bad at cooking but very good at sports.

Harry is a wayward hummingbird who lost his way from Summer Island. He is temperamental and likes to sing. Harry lives in a small cabin in Poby’s house.

The English text to the Pororo Song

I love to play all day
Come join me all my friends
Always happy, as can be
Little Penguin, Pororo

Snow covered wonderland
Make way for Pororo
Always happy, as can be 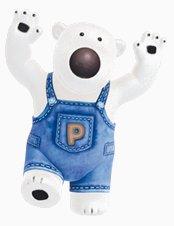 Pororo the Little Penguin is an animated series created entirely by computers, made by Choi Jong-Il from Iconox and produced by the Korean ADV Films. Production began in 2002 and the first episode aired in South Korea in 2003. The cartoon series tells the adventures of Pororo and his friends who constantly experience new adventures, with a practical and moral lesson in every episode.
Pororo is four years old, as old as his target audience. He has a great imagination, just like his audience. In his case it means that he dreams of flying and wears an aviator hat and goggles. Choi Jong-Il gives his characters the opportunity to play and learn.