With his friends Pingo, Pelle and Old Salt, Petzi always goes out to sea again. Every time they do, they make new friends across the oceans, in foreign countries. Funny and fairy-like, full of ideas and surprises.

Petzi’s real name is Rasmus Klump, and he’s Danish. His friends Pelle, Pingo and Old Salt, are originally known as Pelle, Pingo and Skaeg. His parents are Wilhelm and Carla Hansen. They started drawing him in 1951, that year Petzi first appeared in a Danish newspaper. That’s where this success story began. The first album of Petzi, ‘Petzi builds a ship’ (Rasmus Klump bygger skib) came out in 1952 and after that, 35 other albums followed. Arguably, the first albums are the best, with the last becoming less imaginative and less rich in ideas.

But still, Petzi is an extraordinary and charming comic, without the big, dramatic effects. He is liked very much by the children, who love the big, clear pictures. 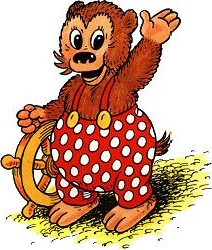 In their first adventure, Petzi and his friend build a ship. They name it ‘Mary’ and they sail across the oceans. With Petzi behind the wheel they have many adventures, but always come back home for some pancakes.

They love making new friends in strange, foreign countries, but they love to come home and eat pancakes as much as making friends.

Petzi is loved all over the world. It’s one of the most successful children’s comic in the world. It has been translated in several European and Asian languages. Although there are only 36 ‘original’ albums, new ones are also made, all still in the style of Wilhelm and Carla Hansen. There was even an animated film series made in the 1970’s, but that was not of great quality. In 1996 a new series was made by Danish en German TV-networks

Wilhelm Hansen was born in 1900, he made a living as an advertising artist from 1917-39. In the 1940’s he began to illustrate stories written by his wife Carla Hansen (born 1906). He also created a weekly comic strip Firlingerne (the Quadruplets), before making his biggest success: Petzi. Also bases on stories written by Carla. The daily strips they produced were used as a base for the albums. They kept doing so until the mid 1960’s. Then came new artists, writing and drawing the Petzi albums, like Tove Norgaard, Ole Munk Rasmussen and Paul Arne Kring. Now the series is drawn by a Swedish artist, called Harald Suneson.

Because Petzi was translated into lots of different languages, lots of countries have their own names for the main characters. We know a few and those are below.

Now follow the 36 albums, all with the original titel.