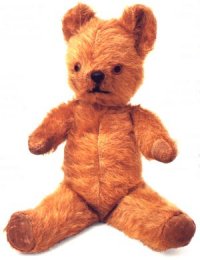 Pedigree Soft Toys Ltd. was a subsidiary company of the biggest toy company in the world in the 1930 till 1950: Lines Brothers Ltd. Originally, Pedigree was situated in the Tri-ang Works of Lines in Merton, Surrey, England. They began production in 1937 en made movable toys till the 1950’s. In 1946 a new factory was opened up in Belfast, Northern Ireland. In 1955 both factories were merged in Belfast. In 1966 the toy production was moved to Cantabury in England. Pedigree Soft toys was closed down in 1988. Pedigree had factories all over the world: New Zealand, South Africa and Australia.

Typical Pedigree characteristics are a vertical middle seam across the head and second seam over the top of the head, where the ears were sown in. Furthermore, the bears have a classic, round head with a not really striking snout. Another model had a triangle shaped segment at the front of the head to make the snout more pronounced.

They registered their trademark in 1942. The trademark helps with the dating of the bears. On the labels is stated if they were made in England (before 1950 and after 1966) or in Northern Ireland (between 1950-1966).