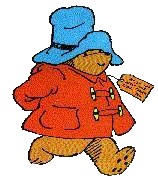 Paddington was born in Peru, where he lived with his parents. We don’t know much about Paddington’s family, only about his uncle Pastuzo. He had a café, high up in the mountains in Peru. Uncle Pastuzo died in an earthquake, the same earthquake that separated Paddington from his father and mother. The only thing uncle Pastuzo left behind was his favourite red hat and his briefcase with the secret compartment. Paddington grew up with his aunt Lucy. She also taught him English, because she always thought that Paddington would go to Great-Britain.

Paddington stowed away on the SS Karenia. He had to hide on the boat to prevent detection, with nobody who could look after him when something went wrong. Paddington wanted to go all the way from Lima to London. The only thing he took with him to eat were five jars of marmalade. It was a good thing that he likes marmalade very much. When he finally arrived in South Hampton, England he took the subway to London, where he sat at the station for hours and hours. Finally the Browns found him and took him home to their children. That’s when all Paddington’s adventures started.

The beginning of the idea which would grow into Paddington, arose in 1956 when Michael Bond one evening before Christmas quickly had to buy a few presents. In a store he found a bear sitting all alone on a shelf. Michael Bond bought him immediately. Two years later the first Paddington book was published. ‘It’s not a bear to cuddle,’ says Michael Bond. ‘It’s more a bear which has to stand in a corner, that’s why he is wearing top-boots.

Paddington has something grumpy, something obstinate -maybe a real bears touch- But beside that he has a winning look of attachment, so everyone wants, despite his defensive look, to hold him in his arms. His famous label says it all: PLEASE LOOK AFTER THIS BEAR. Thank you.

On October 13, 2008, Google changed their homepage to a doodle celebrating 50th birthday of Paddington Bear. The doodle only appeared on google.co.uk and not any other international homepage.