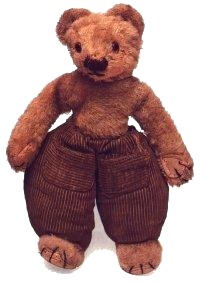 In 1930,W.G. Holmes and G.H. Laxton opened a toy-animals factory in Shropshire, England. In that same year they registered the trademark ‘Merrythought’. In 1931 they made their first catalogue with the Magnet-series in four different sizes. The first Teddy Bears had characteristics which were related with Chad Valley and J.K. Farnell. This was probably due to the fact that two Merrythought managers previously had worked for those two companies.
The production started in 1930 with 20 woman workers. In 1932 that figure had risen to 200 workers. During the 2nd WW production was very low, but in 1946 is was in full swing again. In 1955 the designer of the day Jean Barber created the very popular Cheeky Teddy Bear. 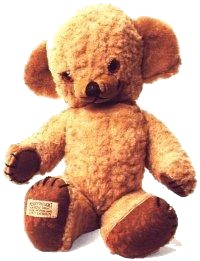 Chummy is one of the first bears made by Merrythought, when they began to manufacture plush animals in Shropshire in 1930. Shortly after the founding, Merrythought began to make new designs. The company manufactured a series of soft alpaca bear cubs, and in the mid 1930’s Chubby Bear. Bobby Bruin and Teddy Doofings represent that new direction. The family Bingie was made in the early years of the company.
The Cheeky-model, with broad smile, got his name on the British Toy Fair in 1956. Cheeky was manufactured in different kinds of plush and in 1962 even with an open mouth. From the late 1950’s, the company also produced toy animals based on television- and cartoon characters. Sooty in 1960, Winnie the Pooh in 1966 and Mr. Whoppit in 1956.

See what prices Merrythought teddy bears made at international auctions.

For a couple of years, Merrythought put a button in the ear [1] of Teddy Bears before the 2nd WW. It almost had the same shape as the one used by Chad Valley, but yellow with a wishbone motive and written across it ‘Hygienic – Merrythought – Toys’. The button usually was located in the left ear, but sometimes on the back of the bear. In that same time frame, an embroidered, woven label [2] was used.
Label [3] was used from 1957 till 1991 and is a woven label with overprint. From 1992 till this date an embroidered, woven label [4] is used. The woven label with overprint [5] was among others used for the registered Cheeky model.

The characteristics of a Merrythought Teddy Bear from the 30’s: shaved snout, high forehead, big flat ears, connected claws and big thighs. The soles were mostly made of felt. Early Merrythought bears had characteristics remanding of other companies like Chad Valley and J.K. Farnell. This makes them difficult to identify. Mr. Twisty Cheeky, an upright Teddy Bear from 1965. Thanks to an internal frame of wire it could be placed in different positions.