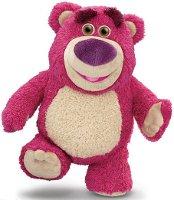 Lotso, or Lots-o’-Huggin’ Bear is a jumbo, extra-soft teddy bear with a pink and white plush body and a velvet purple nose. The loveable bear, Lotso, stand fuzzy heads and shoulders above other teddy bears because he smells like sweet strawberries. With a smile that will light up a child’s face and a belly just asking to be hugged.

At first glance Lotso takes good care of the toys and he looks friendly. However, this facade merely conceals his true nature, that of an insane, sadistic tyrant. This is mainly caused by the alleged betrayal of Daisy. He seems very negative, as evidenced by his statement that the toys will eventually be discarded as garbage, and there is no more salvation for them.

Toy Story 3 is an American animated film from Pixar Animation Studios from June, 2010. It is a sequel to Toy Story 2 and also animated entirely by computer. The story is about Woody, Buzz Lightyear and their friends trying to cope with an uncertain future as their owner leaves for college.

Woody, Buzz and the whole gang back. When their owner Andy is preparing to go to college, his faithful toys find themselves in a nursery, where wild young toddlers with their sticky fingers don’t play nice. They were to go in a box and stored in the attic, but Andy’s mother accidentally donated the box to the ‘Sunshine Daycare’. Only Woody saw what actually happened and he tries to explain to the other toys, but they don’t listen. So they conspire with Barbie’s counterpart Ken, Mr. Pricklepants and a pink, strawberry scented teddy bear Lots-o’-Huggin’ Bear to come up with an escape plan.

From Storyboard to Frame

How do animators translate an idea from storyboard to a frame in the film? Follow the animation process with Lotso.