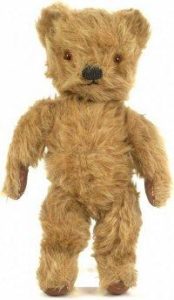 The Chad Valley Company was named after the river Chad, which flowed next to the factory grounds. The company grew through a series of acquisitions from a printing company in 1820 to a toy manufacturer in 1923. In 1931 Chad Valley expanded further when it purchased Peacock & Company, a prestigious toy company in London. Chad Valley used the Peacock label on teddy bears from the Chad Valley Manga series.

In 1978, the company was acquired by Palitoy and in 1988 the Chad Valley trademark was purchased by the Woolworth Corporation. This marked the end of Chad Valley’s long history. 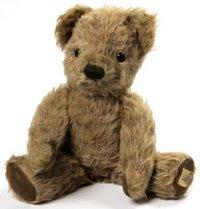 ‘Chad Valley’ was the hallmark of the company by the English brothers Johnson, which began in 1820 in Birmingham, England as an office supplies company. In 1897 the company moved to a factory in the Midlands, called Chad Valley Works. The business grew so big, that in 1920, the production of toy animals moved to a separate factory: Wrekin ‘Toy Works, Wellington.

Chad Valley produced some famous teddy bears from the early years of radio and TV.

When Chad Valley celebrated their 100-year anniversary in 1960, the company had seven factories and there were more than 1000 employees. In 1967, Chiltern Toys was acquired by Chad Valley to become the largest manufacturer of soft toy in Great Britain. The recession of the 1970s led to the closure of six of the seven factories. In 1978 Chad Valley was taken over by Palitoy, which was later bought by the American company Kenner Parker. In 1998, the Chad Valley trademark was bought by Woolworth from Great Britain, a new series of Chad Valley toy animals was released, which were made in Asia. The Home Retail Group bought the brand in 2009 and made Chad Valley products, which were exclusively available at Argos.

The teddy bears from the twenties and thirties were marked with a metal, with celluloid covered button with overprint [1] or/and a woven label. The Aerolite-trademark [1] is a reference to the stuffing that was used for the Teddy Bears, a soft, light kapok. It was used from 1923 till 1936.

Chad Valley used to place the trademark button on the right ear, but now and again on the chest or on the back. This probably due to problems with Steiff’s patent on the button in the ear. Besides the with celluloid covered, metal button [2], all the Chad Valley bears from the thirties and forties, got a white, woven label with red letters [4]. The label was sown onto the sole of the feet. On smaller bears, it was sown on the leg.

The by Chad Valley used label, when they became ‘Toymakers to her Majesty the Queen’ [3]. It reads: ‘Chad Valley Co Ltd. by appointment toy makers to H.M. the Queen’.

The early years were an experimental period for Chad Valley. Teddy Bears are found with a filling from pieces of cork and others with metal joints. From 1920 onwards Chad Valley used a kapok stuffing.

The Chad Valley Teddy Bears from the twenties and thirties: a prominent, round forehead and a big, short, trimmed snout. Along with a less prominent hump, shorter limbs and smaller feet.

In the early thirties, the company advertised Teddy Bears of fourteen different sizes, among which three bears with a hard or soft stuffing. At the end of the decennium only the soft kapok was used. In the same period the noses changed: the rectangle shaped, horizontal stitched and the triangle shaped, vertical nose, evolved into a thick stitched, oval shape, which is called the ‘typical Chad Valley-nose’.

During the war years of the 2nd WW, when mohair plush was difficult to obtain, Chad Valley made Teddy Bears from white sheep fleece. These bears traditionally had soles of black leather.

The glass eyes were gradually replaced by Chad Valley for plastic eyes. Also they produced some Teddy Bears with a lifelike nose from casted plastic. The company also made bears from nylon and other synthetic material.

Characteristic for Chad Valley are the big, flat ears which are almost at the side of the head.

Chad Valley traits (’60-’80): characteristic head with a prominent snout. A broad, thick stitched nose and big, flat ears which are sown onto the face seam. The back is straight with broad shoulders and bent, small arms of the same length as the bear. The thick legs and big feet are also characteristic.

See what kind of prices Chad Valley teddy bears made at international auctions.