The Care Bears live in a magical place called Care-a-Lot. It’s made up of clouds and rainbows, from where they watch over the feelings of all children around the world. Whenever they hear a “Care Bear Alert”, they know they are really needed. Their motto is “Caring is what counts”.

The Care Bears were released in many countries and everywhere they are named different:

There are ten original Care Bears, which were followed by 14 other bears in the eighties. Meet all the Care Bears with information about their gender, colour and belly symbol. You can find them on our page with all the Care Bear characters.

Villians
In all the films and TV series the bad guys try to stop the Care Bears in their good intentions:
Professor Cold Heart, his assistant Frost Bite and sometimes auntie Freeze.
Wizard No Heart, his bumbling apprentice Beastly and ill-tempered cousin Shreeky.
And furthermore Nicolas and the Evil Spirit, Dark Heart, The Wizard of Wonderland and his assistants Dim & Dumb, the Evil Rat King and Evil Vizier. In 2002 came the rat Sir Funnybone and in 2007 Grizzle. 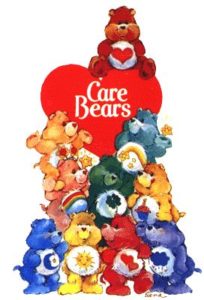 The Care Bears are characters designed by American Greetings in 1981 for greeting cards. The original illustrations were drawn by Elena Kucharik. In 1983, Kenner Products, a toy manufacturer made the Care Bears into plush dolls. Each bear has a different colour and a symbol that stands for its mission and personality. The symbol is known as their tummy symbol.

In 2002 the Care Bears were reintroduced as a new toy by Play Along Toys. As part of the comeback, two computer-animated movies were produces: Journey to Joke-a-lot (2004) and Big Wish Movie (2005). In 2007 another movie was produced, Oopsy Does It!

1981
Muriel Fahrion designed the first six Care Bears for greetings cards, and then Elena Kucharik took over and drew hundreds of greeting cards.

1983
A toy line is made by Kenner Products and as support, the first TV special: The Land Without Feelings.

1985
The Care Bears play in their first movie: The Care Bears Movie. Later that year, a TV series is produced that eventually would be 22 episodes long.

1986
The second theatrical movie: Care Bears Movie 2: A New Generation. In that year also began the new TV series: The Care Bears TV Series, which would run for two seasons and 70 episodes.

1987
The last cinema movie: The Care Bears’ Adventure in Wonderland.

1988
In this year, the TV movie The Care Bears Nutcracker Suite is produced. The movie was originally intended as a cinema movie, but the poor results of the last movie it was shown straight on the TV.

2002
For the 20th anniversary of the Care Bears, American Greetings brings a new line of dolls, toys and movies. The Care Bears are redesigned and adapted to todays standards.

2005
The second DVD with: The Care Bears’ Big Wish Movie.

2007
Again in 2007, the Care Bears are re-released in a new design, as part of the 25th anniversary. Including new dolls, a new movie: Care Bears: Oopsy Does It! and a new TV series: Care Bears: Adventures in Care-a-lot consisting out of 26 episodes over two seasons.