The Berenstain Bears is a series of children’s books, created by Stan and Jan Berenstain. The books are about a family of bears who learn a valuable lesson in each story. Since the first book in 1962, The Big Honey Hunt, there are more than 300 titles published. 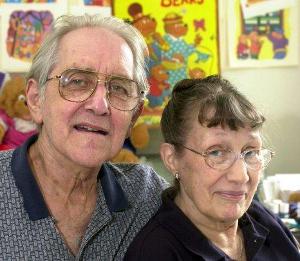 Stanley Berenstain and Janice Grant met for the first time in 1941 on their first day in the art class at the Philadelphia Museum School of Industrial Art, where they immediately formed a bond. During the Second World War, they were separated, but after the war they reunited and married in 1946. They first worked as art teachers, but most of all they wanted a career in comics. After several books that were focused on parents, the Berenstains focus on children’s books in the 1960s.

Their first story was “Freddy Bear’s Spanking”, which finally resulted in the first book: the Big Honey Hunt. Theodor Geisel, the publisher, advised Stanley and Janice to choose another animal for their stories, because there were so many bears in children’s books already. The Berenstains went to work on a penguin, but the first book sold so well that Geisel changed his mind. The second bear book appeared in 1964: ‘the Bike Lessons’ with the names Stan and Jan Berenstain. Geisel had used these names without consulting the Berenstains and he is responsible for the name ‘Berenstain Bears’.

In the following decades, Stan and Jan Berenstain wrote more than 300 books from the studio in their home in Philadelphia. First, a storyline was developed, a concept was made that resulted in a manuscript of 1,100 words. Then they worked on the drawings together.

Their sons Michael and Leo also went into the family business. Michael works as a writer and illustrator, Leo does the business side. Stan Berenstain died in 2005 and Jan Berenstain passed away in February 2012.